IGA Romeo’s stunning new food hall at the MLC Centre in Sydney’s CBD was helped into reality by SUPAWOOD who designed and supplied a range of products customisedspecifically for the project.

The client wanted something dynamic to reflect their new market direction aimed at catering for a diverse array of shoppers. The designers, Saunders Global, had a concept involving multiple lining types but no standard products existed for most of these. 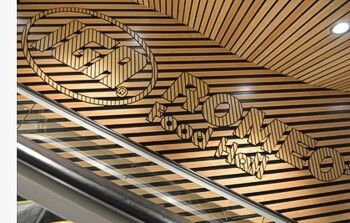 Following SUPAWOOD’s successful involvement in the MLC Food Court Ceiling, they were approached to help take the preliminary idea to a workable final design, adapt products to suit and co-ordinate installation through to completion. Throughout the project SUPAWOOD acted as a liaison between the client, designer and builder. During the design development stage multiple sets of samples and pricing were provided until the final product combinations and finish matches were confirmed and approved. SUPAWOOD also recommended a suitable installer. By providing this full service both the design intent and budget were maintained throughout every stage.

To achieve the final design outcome SUPAWOOD adapted several of their products which included:

The IGA Romeo’s store is located in the basement with minimal exposed frontage so to lure people in, LED lit beams have been used over both the escalators and the stairs which form the main entry points into the store. This effect continues throughout the store directing patrons along key paths around the departments.

To achieve this SUPAWOOD adapted MAXI BEAM by integrating custom designed LED lighting into the beams. Bespoke beams morph from horizontal to vertical alignment, twist, curve and turn, literally lighting the way into and around the store.

Supawood supply complete the LED lighting integrated into their beams. Lights can be cool or warm white and are normally supplied with a diffuser so as to show a continuous beam of light. LED light strips are available in three different brightnesses to fit your exact application.

The Supawood LED lighting strips can be curved in both directions as well as be twisted.

The position of the IGA Romeo’s food court in the basement of the MLC Centre meant the store had limited frontage on which to display signage to alert people to its presence. To overcome this, the designers Saunders Global, developed a concept which incorporating the signage into the slatted lining of the wall adjacent to the escalator from the rail link corridor outside the store.

Finding a product suitable to produce this type of effect posed problems so Supawood came up with the solution by modifying their slatted panels to achieve the desired result.

The client’s logo has been integrated into the slatted wall by using angled slats of a different width, an effect produced in the factory ready for quick installation in modules on site. Utilising a backing board the system created produces a continuous wall with inconspicuous staggered butt joints rather than panel sections. The designers made good use of this system creating contrasting areas of “Black-on-Timber” and “Timber-on-Black”.

This slatted effect has been continued either side of the logo wall to continue to both enterences and as a feature wall within store. The bulkheads in the store have also been lined with vertical slats then lit with LED strip lights to highlight the signage which defines the various departments.

This new flexible method of creating timber feature walls can be used to create wavy, curved or custom-branded feature walls in your next project.

The main food hall ceiling has been lined with suspended timber WAVE BLADES which curve up and down to follow and disguise the complex constraints of the concrete ceiling overhead. By using the blades at different levels and directions the ceiling defines the main areas of the store. The LED lit beams intersect the blades and make overhead paths through them around the store. Lighting and other services are hidden by or integrated between the blades.

To achieve timber ceilings in food preparation area is always problematic due to strict regulatory requirements so Supawood developed a food-safe lining specifically to match these guidelines.

The ceiling over the deli forms a circular feature created in contrasting grooved and bubble pattern panels. The bulkheads throughout the store have also been given the Food-safe finish.

IGA Romeo’s Food Hall is an excellent example of SUPAWOOD’s design and construct service ability. This project demonstrates how they can take ideas, develop them, produce what is needed, oversee installation and then deliver the whole through to a successful completion, all done while maintaining superior quality and tight lead times within a designated budget.

For more information about our Design, Supply and Install Service or the customization of products to suit special needs please Contact Us... 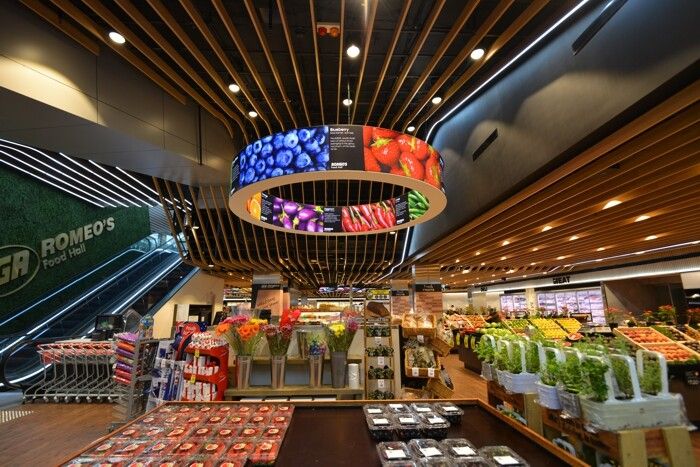