Maxi Beam lightweight beams have been used in the refurbishment of The Market at Westfield Southland, one of the biggest shopping centres in Victoria.

The design brief called for a chunky beam ceiling look, but this posed logistical and installation problems in a live environment. Scentre Group with design partners One Design Office, wanted to source a lightweight beam alternative to solid timber which was easy to get onto the site and didn’t require any additional structural alterations to the existing ceiling.

Maxi beam was ideal as its light weight allowed the designers to achieve the beam look they wanted without needing expensive reinforcing of the existing ceiling. Plus, it resolved logistic problems. The beams were also delivered prefinished and cut to size, which minimised installation noise and dust levels. For this reason, this beam product has proved extremely popular for retail projects.

In this project, the lightweight beams have been used for the ceiling in two different levels and finishes to define distinct areas of the market.

The ceiling toward the front of the market has been kept high and flush against the now black original ceiling. This effect maintains an openness as well as a directional flow to draw people into the space. Rustic Oak Supalami finish on this section of the ceiling also incites a warm welcoming feeling.

The other sections of the ceiling toward the back side and above the upright fridges has been lowered by suspending the beam. Here the beams have also been run in the opposite direction to the beams at the front to further define this area and form a path around the fridge area. To illuminate this area and keep this part of the market well lit, the beams here are finished in a White Supalami.

The refit of The Market has been so well accepted by shoppers that soon after it opened it won the Westfield Southland’s ‘Shop of the Week’. Serena Jelbart from Scentre Group said that the Maxi Beams ‘look fantastic’.

Pei Wen Kwek from One Design Office said, ‘We worked closely with both Scentre group and the client to achieve what we believe is a great outcome. It was great to work with Supawood on this project, and we look forward to specifying more of their products in the future.’ 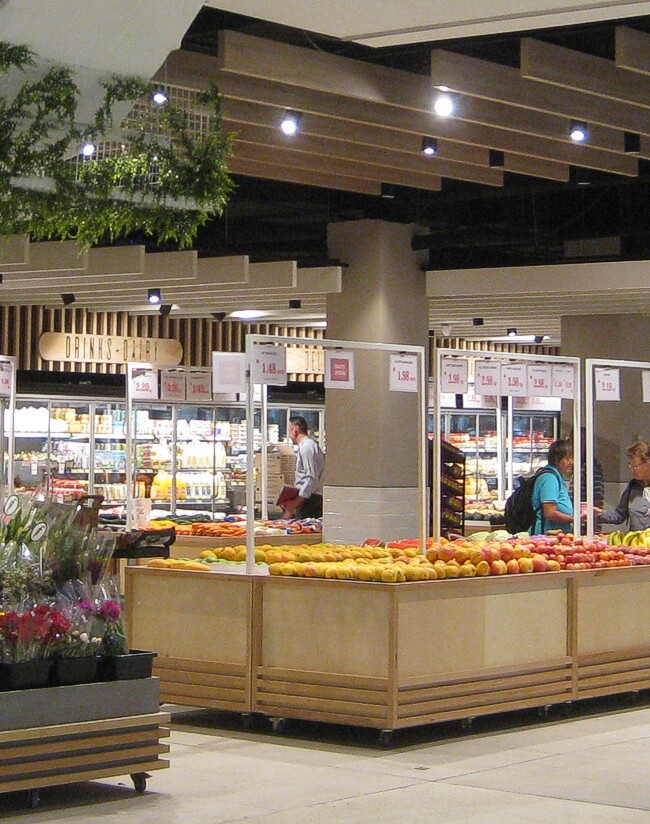